Uranus . . . slow moving, out in the periphery of star, constellating with Sun, Mars, and Rahu in Libra, 9th House . . . spontaneous, impulse to act on vision immediately, loves beauty, symmetry, harmony of form and shape (think Uranus doing away with ugly Cyclops offspring, so grossly misshapen . . . immediate action based on repulsion of what’s seen on the surface right away without thought, intention, insight::simply a desire to remove and reject what’s repulsive, move it away from sight!! . . . infuriating to Gaia, who then plots his destruction with vengeance and spite through manipulating their son Kronos a.k.a Saturn), rebellious and rejective Uranus is capable of remorse and sorrow when things are brought to attention that hadn’t been perceived::not so much a ‘Visionary’ as much as a quality that brings action to what’s seen by means of vision, initiative and impetus instigated and moved by what’s perceived, Uranus acts out against . . . discord, ugliness, opposes disharmony, so Uranus is rebellious but the rebellion is motivated by desire to flow with the beauty walk . . . rebels against institutionalized authorities, rebels against injustice, rebels against whatever is considered acceptable and normal, striving for what’s higher and also acting out to bring that about even if it means eliminating his own kindred, so Uranus is capable of ruthless action . . . . dissolution and dispersal of mutation, retardation, malignancy, what’s unappealing, unappetizing::must go and be recycled::Uranus the Recycler!!

Uranian art’s moving along slowly::came spontaneously out of a page I was using to wipe watercolor paint off my brushes while working on other paintings . . . . dabs strokes dashes, did a pencil drawing and butterfly shapes flew out . . . the page was worked over weeks

Today I tore out an unfinished work from a sketchbook and ‘recycled’ that into these pages . . . there’s a hummingbird drawn in pencil, will see where it all goes, unhurried slow motions steady onward building relationships with what’s odd, doesn’t fit in one place but has a place somewhere of belonging, a spontaneous learning method, educating self from 9th House with Sun light illuminating and facilitating vision, Mars ready for action and movement though Mars also adds strategy and foresight toward a big picture being Master and Commander involves planning, organization, tying them together into sustained activity involving the conquest of nothing other than self::for me that is the only conquest worth the effort of fighting for rather than moving outward to ‘conquering’ others, conquer the sails of self . . . a collaborative undertaking where Uranus brings in that peripheral galactic quality from outer reaches internal for combustion! 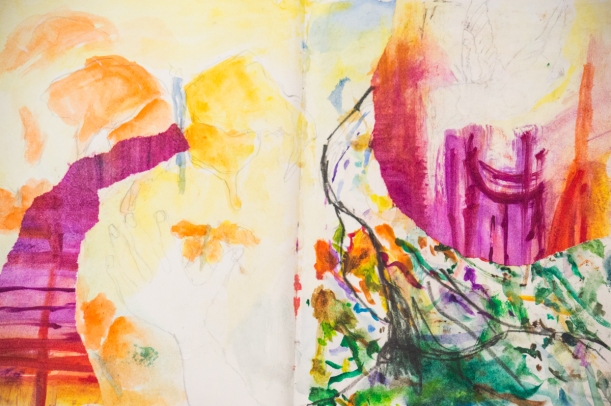 10.2.17 Yellow Lunar Human Core
Did a bit of painting in acrylic over the whole shebang, looks like a girl playing with butterflies and hummingbird . .. 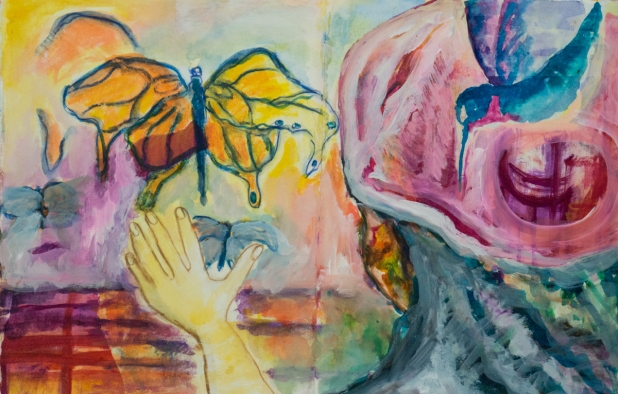 Finding my core spontaneously, this was incredible FUN flowing and splattering with acrylics!  Pure joy to play and come undone loosely moving and jamming with red orange yellow a bit of purple blue and white, moving from in the apple core; a breath of fresh air! Yes!